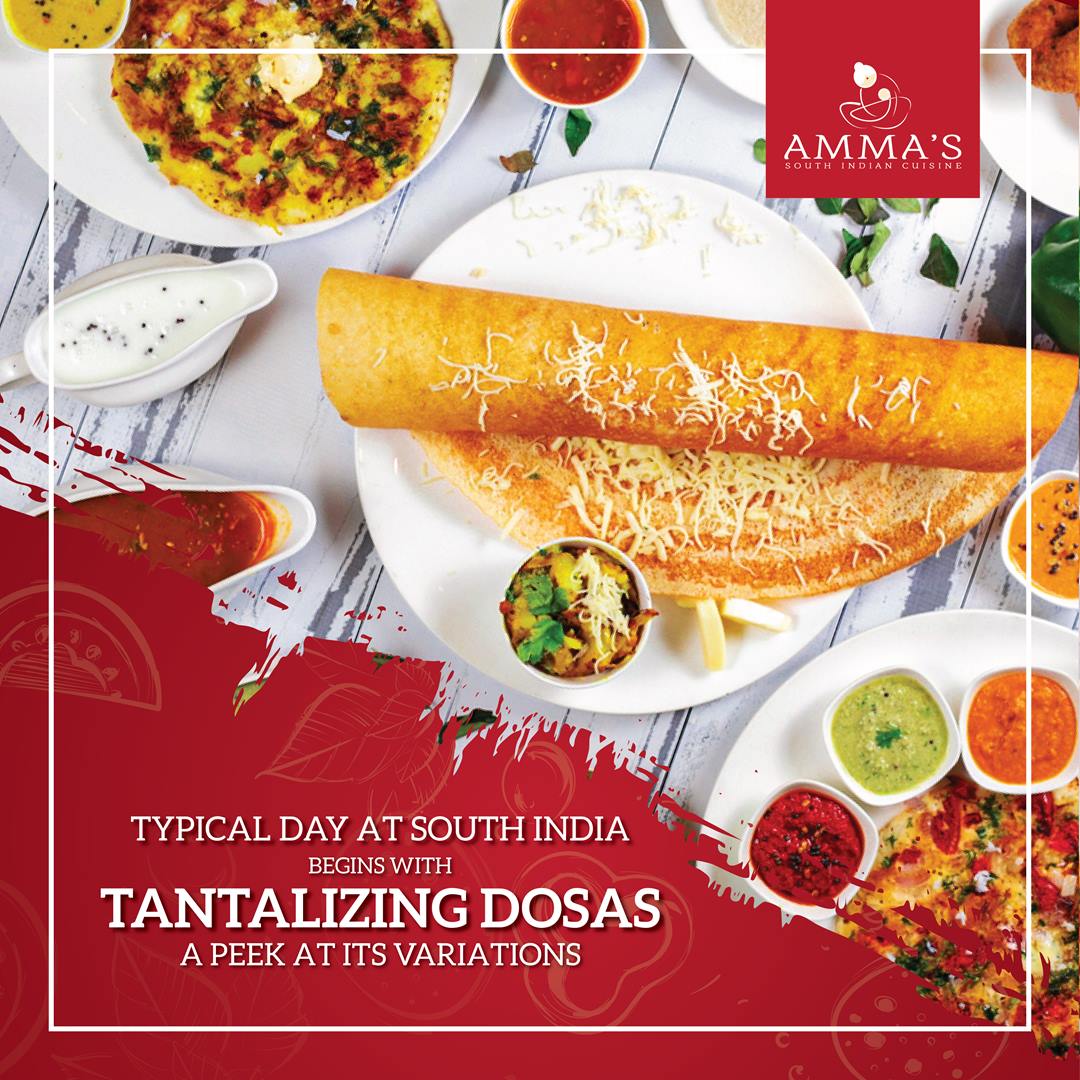 Crispy rice batter fried on a Tawa filled with fresh-cut vegetables served on a plate alongside chutney and lentil stew brings bliss to the taste buds, and guarantees a healthy start of your day. To know more about dosas and their varieties give a quick glimpse at what follows.

PLAIN DOSA – A popular South Indian dish, that dates back to the first century AD, as per Sangam Literature, has now made its way around the world. Over time and again, Dosas have proven to be a dish that everyone loves. Made with a batter of rice and black gram mixed, a simple plate of traditional dosa comes as a good source for protein and carbohydrates. But traditional dosa may be stale for a few (although I highly doubt that), chefs have upped their game to bring a variety for the world to savour on.

Like people, Dosa comes in all shapes and sizes.

Famous in the areas in and around Mysore/Bangalore, Mysore Masala Dosas are thick dosas with garlic-red chilli chutney smeared on the inside before filling in the masala (potato bhaji). Finessed with a small pat of butter atop the bhaji and the dosa is ready to be served with coconut chutney.

Masala Dosa is prepared with the batter made of urad dal and rice. The fairly thin crisp is stuffed with potato and onion masala and is served hot with a bowl of sambhar or lentil stew. This dosa is commonly prefered for breakfast in South India.

Rava dosa switches it up a notch with the batter made from Rava or Semolina, which doesn’t require any fermentation, unlike rice. Giving the dosa a new texture, the batter is also mixed with diced onions and green chillies for taste.

Pesarattu is a protein-packed breakfast made with green gram and spices. This wholesome dish is famous in the cities of Andhra Pradesh and Telangana. Pesarattu dosa is filled with rice upma and is served hot with ginger chutney, making one relish the dish in every bite.

Adai Dosa, a popular Tamil cuisine that is made with lentil and spices, making it a healthy breakfast,  is rich in protein and essential nutrients. Adai dosa is served hot with chutney that tangos with your taste buds.

Step into the world of Dosa and you will find yourself smacking your lips at the ever-growing delicious varieties that would make you skip your diet. Be sure to try out the classics and be adventurous to try the new ones too. Amma South-Indian Cuisine is here to pamper you with varieties customized to your taste as well.